Nineties babies, rockers of all ages, Marbel boys and girls, this is what you’ve been waiting for! Parokya ni Edgar will invade Marbel for a one night concert on April 29, 2016 at South Cotabato Gym and Cultural Center!

The concert dubbed Rakrakan sa Tag-init LIVE will surely heat up your summer nights as Parokya, one of the top rock bands of the nineties that remains as popular today, rocks their way to the south! Relive the nineties rock scene and do the headbangin’ like you did in high school! Get your tickets as early as now!

Ticket prices are as follows:

Get the VIP tix and you are in for exclusive surprises!

The concert will also feature DJ Carlo Atendido, winner of the Red Bull Thre3style Philippines DJ Championship and placed 3rd at the Thre3style World DJ competition in 2014. He was the only Asian representative in that worldwide competition.

The  Rakrakan with Parokya is brought to you by Wanted Promotions, a Marbel-based event group that has a long list of concerts and juicy events for the Marbel crowd!

The concert is also in partnership with Ninety-nine Brewery, AMCOOP and Frankees Travel and Tours. For inquiries contact George at 09177010529 or Carine at 09173121609.

Join us do the jump around to the tune of Buloy and Halaga and some hypnotizing EDM! See you there! 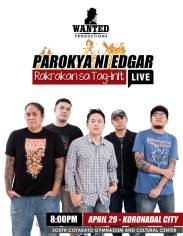